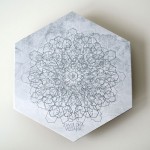 This is second volume from series of albums dedicated to Purification by Four Elements: Water.

The music is composed by Kateryna Zavoloka, transmitting different states of water and how they can be specifically translated to the sound. Low frequencies as a depth, traditional vocal as surface of sonic water. This album is a result of 2-years research, including work at Electroacoustic Music Studio at Academy of Music in Cracow and concerts-performances in collaboration with live generative interactive visuals from Laetitia Morais.

It is exploration of Water Element. It is inspired by knowledge about Ukrainian Cossacks-Magicians, so-called Kharakternyky, that could control forces of nature, particularly water. They used to drink spring water to purify their energy and to became undistinguished and fluid as water.
To reach inner melting.

Tracklist:
1. Splendent Viscid Fluid
2. Vivid Chains
3. We Drank Water On Vehement Shore Of A Bright Life
4. Vedana Is Lead By Her Will
5. Green Spiral Of Meander
6. Immersion In Transparent Circle
7. Aureole Of Momentous Splash
8. Crystal
9. Moment Of Serenity Flows