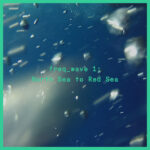 Freq_wave with the sound from Zavoloka is out now

A freq_wave is a rogue wave: unpredictable, sudden and impacting with tremendous force.

“freq_wave: seven seas” begins today with the first oceanic trajectory featuring the work of 12 sound artists and artist groups united in a monster wave to bring oceanic creativity to the fore. The first in a series of seven releases, meandering around the trajectories of TBA21–Academy’s latest long-term research commission, Territorial Agency: Oceans in Transformation, explores the aquatic sounds of the trajectory North Sea to Red Sea, highlighting the hidden ecosystems of the Ocean through a web-based sound installation to call attention to the threatened soundscapes of the sea.

“freq_wave: seven seas” is a collaborative sound project unleashing 84 rouge sound artists for the Ocean. Curated by Carl Michael von Hausswolff, co-curated by Alonso Vázquez and commissioned by TBA21-Academy, the project will gradually unfold on the online platform Ocean Archive.

“I would like to dedicate my track called Afalina to the Ukrainian Crimea. Twelve years ago, when I last visited the Crimea peninsula on the Black Sea coast in the wild in a tent, we watched dolphins hunting for fish every night, and we had a late dinner with them at the same time. They have their own language and signature whistles with a unique frequency curve, so I decided to synthesize these sounds of a fun conversation between dolphins in the sea. Now I can not go there, since Crimea has been occupied by Russia, but these sounds are reminiscent of a very wonderful trip to nature.”

Viewers are welcome to engage with their compositions through the included mixer.

The North Sea to Red Sea trajectory departs from the peatlands of Scotland, weaving its way across Europe and settling in the Gulf of Aden. It is a trajectory characterized by rapid modification, pertaining to newly intensified circulations of goods, people and fuel. Taking Venice as its focal point, it highlights how apparently distant phenomena, such as supply chains, can disrupt and transform small-scale ecologies. The artists within this group have been selected for their familiarity with the region, their interest in the trajectory’s themes, or their orientation towards particular oceanic sounds. This group features; John Duncan, Bethan Kellough, Klara Lewis, Francisco Meirino, B.J Nilsen, Peter Rehberg, Hans-Joachim Roedelius and Zavoloka.