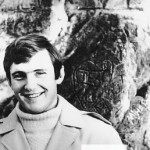 Uncontrolled Stream!
That was a rise of amazing Ukrainian music.
That music was performed at big stadiums at that time. Film starts with a trip on train “Donets’k – Verkhovyna” and meeting of Carpathian girl with a miner from Donbas…

Volodymyr Ivasyuk was a very popular Ukrainian songwriter, composer and poet. He is the author and composer of the widely known song “Chervona Ruta” and many other very popular Ukrainian songs. Ivasyuk was inspired by the mention of “Chervona Ruta” (Red Rue) in some of the kolomyjkas (Carpathian hutsul songs). According to the local legend, rue turns red on the Day of Ivana Kupala for a few minutes and a girl that finds that flower will be happy in love. Volodymyr Ivasyuk also created “Waterfall”, “Fate Has Its Own Spring”, “Song Will Be Between Us”, “Ballade About Two Violins”, “Ballade About Malvy”, “I Am Your Wing”, “Invite Me In The Dreams”, “Hat”, “Two Rings”, “Uncontrolled Stream”, “Love Blossoms Only One Time”, that were very popular too… Volodymyr Ivasyuk was murdered by KGB at age of 30 because of the political and Ukrainian nationalist nature of his songs. His celebrity status in the soviet union and his cultural contributions in general, and Ukrainian in specific, drew the attention of soviet authorities. His songs, mostly about love to Ukraine, were perceived as rousing nationalist sentiment in listeners. The evidences points to the KGB as the perpetrator of the slaying. Ivasyuk’s funeral was attended by over 10,000 people and turned into a mass protest against soviet regime. After his death his compositions were removed for a time from sale and radio play.

It was really hard to find this film in original Ukrainian before (as usual in soviet union it was translated/censored into russian language), but finally, I found it!