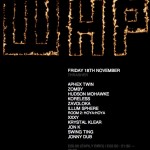 “Aphex Twin makes his long awaited return to the Warehouse Project after his triumphant set two years ago, joined by some of the most exciting acts in the UK to follow in his musical legacy; the mysterious Zomby and Glasgow’s Hudson Mohawke. The much talked about 19 year old Koreless is joined by esteemed Ukrainian electronic musician Zavoloka. Massively popular Manchester institution Hoya Hoya is known as one of the most forward thinking and ground breaking clubs in the city, so it’s fitting they host the back room alongside such musical pioneers.”