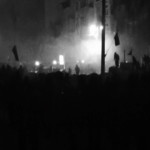 In many ways we considered Maidan as a radical purification process, not only for our country but also ourselves. It felt like a big fire came to Ukraine and changed so many things in our lives. It still does. First the revolution, then the Russian invasion. We could say that it’s the biggest challenge for all of us throughout the past 25 years.

During the revolution there were a few moments which seemed to us the most important and impressive of our whole life, even though some memories of the events on the streets are still very hurtful. Sometimes we think that before this revolution we were both naive and infantile persons who have now awakened, in some ways at least. For both of us Maidan caused some mystical and maybe even religious transformation inside.

When we talk about Maidan we often talk in terms of inner transformation rather then political aspects, even though politic came too far in our lives.
During whole time of protests aside of “normal” protester activities like building barricades, delivering food, medicals or napalm to Maidan, or just being present on place during quiet times, we were always thinking how we can participate in that process as artists. Can we add something to strengthen the movement? Can we explore revolution from unconventional sides?

The final answer came with first real fire in January, when first police cars were burned down, when Molotov cocktails were mixed in hundreds of portions every minute, when pavement parts became a weapon. Each burned police car or bus immediately became a war drum, played during the fights. It was a perfect order inside of the chaos symphony, where each moment drum patterns were changing but holding the same endless organic sound texture we never heard before. We both took microphones and cameras and documented as much material as we could…

“If protests happen under national flags it means that country is occupied.”
someone said on streets